Why pay a broker mark up? Deal direct for cast bronze parts or bars made to your exact specifications for any application. Veteran owned. Competitive prices and delivery.

All eyes remain on China these days. The economy of the world’s most populous nation with the second-leading GDP began to run into problems five years ago. In late 2015 and early 2016, the slowdown in Chinese economic growth weighed in markets across all asset classes. Since China is the top copper consumer in the world, the price of the red metal declined to a multiyear low of $1.9355 per pound in January 2016.

The world had become accustomed to double-digit economic growth in China, but as the economy grew, it became impossible to sustain that level of economic expansion. In 2016, Chinese President Xi rolled out the “new normal,” a program that lowered expectations and shifted sentiment from the days of double-digit GDP increases to sustained growth around the 6% level.

In 2018 and 2019, the escalating trade war between the US and China caused another period of risk-off action in markets. At the same time, protests in Hong Kong added fuel to the fire that weighed on the Chinese economy. In early 2020, the situation in Hong Kong calmed, and the US and Chinese signed a “phase one” trade deal that de-escalated the trade war, causing optimism over economic growth to rise. The price of copper moved from below $2.50 per pound in early September to just under the $2.90 level on the nearby COMEX futures contract. Meanwhile, the outbreak of Coronavirus poses a new threat to the Chinese economy these days.

Freeport-McMoRan (FCX) is one of the leading producers of copper in the world. FCX shares move higher and lower with the price of the red metal.

The price declines to a slightly higher low

In August 2019, US President Donald Trump became frustrated with the pace of trade negotiations with China and Chinese backtracking during the process. The President sent a message by slapping new tariffs on China, escalating the trade war to a boiling point. China retaliated, and the rhetoric flew back and forth between Washington and Beijing. Fears that protectionism would cause a global recession gripped markets across all asset classes. Since China is the demand side of the fundamental equation in the copper market, the price of the red metal fell to a low of $2.4675 per pound in early September, the lowest price since December 2016.

The weekly chart highlights that copper put in a bullish reversal during the week that it fell to the lowest price in three years. As the US and Chinese continued to talk and negotiate, the price of copper rose. At the end of last year, news that the two sides reached a “phase one” deal de-escalated the trade war. Copper rose to a high of $2.8860 per pound on the nearby COMEX futures contracts during the week of January 13. The US and China signed the agreement in Washington DC on January 15.

Meanwhile, in the immediate aftermath of the “phase one” deal, China suffered another setback, unrelated to trade. The outbreak of a virus caused concerns over the Chinese economy to mount, weighing heavily on the copper futures market. After reaching the highest price since the week of April 29, copper fell throughout the second half of January and reach a low below the $2.50 level in early February. The most recent nadir at $2.4875 on February 3 turned out to be only two cents above the September bottom.

Coronavirus and the Chinese economy

The roots of Coronavirus remain a mystery, but it began in China, and the number of fatalities and reported cases have risen daily. As of Tuesday, February 18, over 150 million people in China were under Coronavirus lockdown. As over 10 percent of the nation’s population facing restrictions to prevent the spread of the virus, it is having a significant impact on the economy.

In late 2015 and early 2016, when fears that double-digit economic growth in China was a thing of the past, markets across all asset classes experienced turbulence. The price of copper fell to its lowest price since the 2009 when it reached $1.9355 per pound. The price action in copper, and other markets, signaled that when China comes down with an economic cold, the rest of the world suffers the financial flu. The threat of a pandemic of Coronavirus is another example of how a weak economy in China is a threat to the global financial system. As the world waits for developments on Coronavirus, copper fell to a low that was just two cents above the bottom during the height of the trade war.

Lots of volatility in warehouse stocks

One of the factors that can impact the price of copper is the level of warehouse stocks on the London Metals Exchange. The LME is the most liquid exchange in the world when it comes to trading and hedging copper and other nonferrous metals including, aluminum, nickel, lead, zinc, and tin. China is the demand side of the equation for all of the base metals, as they are the building blocks for infrastructure. 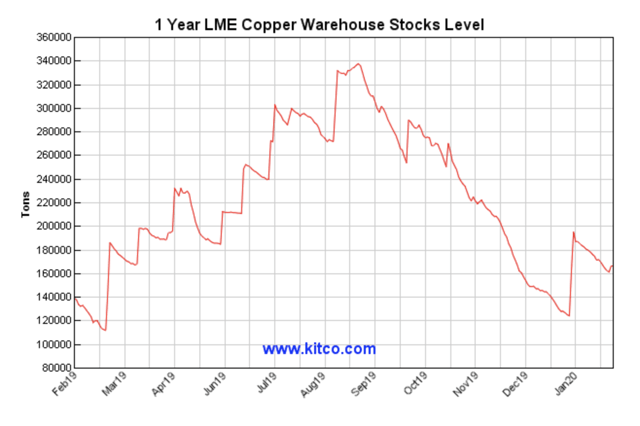 As the chart of warehouse stocks on the LME displays, inventories fell to a low of under 120,000 metric tons in March 2019 when the price of copper on COMEX was just under the $3 per pound level. The high for last year came in mid-April at $2.9955 per pound. Stocks then rose to a high of almost 340,000 tons in late August and early September, when copper moved to its low of $2.4675 per pound. The move to just over 120,000 tons in early January occurred as copper was approaching the $2.90 level. The recent decline below the $2.50 level on the back of Coronavirus came as LME copper stocks rose to almost the 200,000-ton level. The price of copper recovered to the $2.60 level over recent sessions. As of February 20, LME stocks stood at 164,850 tons as the warehouse inventories declined since January. The inverse relationship between copper warehouse stocks on the LME and the price of the red metal make it a critical metric to watch over the coming days and weeks. A further decline in stockpiles would likely support the price of copper, while a sudden rise may take the price back to the $2.50 level or lower.

FCX is hanging in there

In 2020, copper has already traded in a 39.85 cents range on the nearby COMEX futures contract. The midpoint of the range is $2.68674 per pound. At around the $2.60 level, copper is trading below its average as it waits for news on Coronavirus and the Chinese economy.

Freeport-McMoRan is a leading copper producer with properties in North and South America and Indonesia. At $11.86 per share on February 21, the company has a market cap of $17.209 billion and pays shareholders a 1.65% dividend. 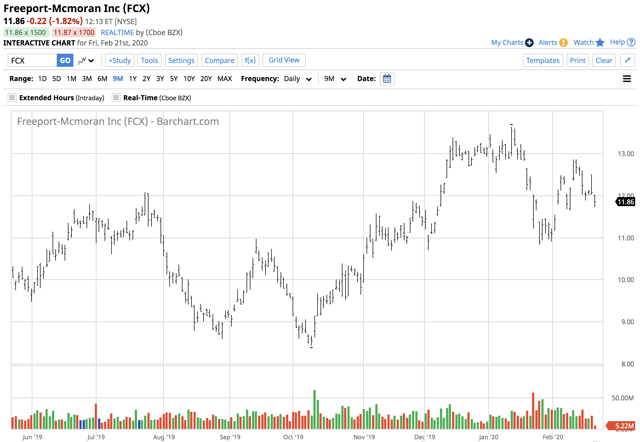 FCX will move with the price of copper over the coming weeks and months. Copper will be moving with stockpiles on the LME and developments on the spread of the Coronavirus.

I believe that the price of copper will eventually head higher in 2020, and any periods of price weakness will present buying opportunities in both the red metal and the shares of FCX.

Coronavirus is now the primary factor weighing on China’s economy, which has overshadowed the “phase one” trade deal over the past weeks. The first reason why copper should move higher is the actions taken by the Chinese government and other nations around the world to contain the spread of the virus. We are now coming towards the end of the winter season in the northern hemisphere. Warmer weather conditions over the coming weeks and months could curtail the spread of Coronavirus.

The second reason is that once the virus is under control and cases and fatalities stop rising, the market will turn its focus back to the progress on trade that takes the pressure off China’s economy. Moreover, the Chinese government will likely stimulate its economy, which would be bullish for the prices of copper and other commodities.

Finally, the price of crude oil appears to have stabilized after probing below the $50 per barrel level. The price was trading at just over $53 on Friday, February 21. Crude oil moved a bit below the bottom end of its trading range over the past year in February on the back of fears over Coronavirus. If crude oil begins to work its way higher, copper is likely to follow. Oil is a significant cost factor for copper production as well as a barometer for global growth.

The path of least resistance of the prices of both copper and FCX shares is a function of the Chinese economy. For anyone who believes that the risks of Coronavirus will recede and the “phase one” trade deal will trump the current environment of fear and uncertainty, the red metal and FCX are good places to place a wager.