Beckett Bronze Company was incorporated May 21, 1913 as the Delaware Brass and Aluminum Company by a group of stockholders which included John Beckett, a molder, and his son, Charles.

Copper prices fell for the fourth consecutive session Tuesday as fresh worries about the global economy hit commodities across the board.

Front-month copper for December delivery slumped 3% to $2.6710 a pound on the Comex division of the New York Mercantile Exchange—its worst day since Aug. 15 and its lowest close since Oct. 31. Prices are down 19% from their June four-year highs and on track for a fourth consecutive quarterly decline, hurt by fears that a global economic slowdown will lower demand for materials used heavily in manufacturing and construction.

Weak economic figures from China, in particular, have hurt industrial metals such as copper lately, as the country is the world’s largest commodity consumer and accounts for about half of global copper demand. The continuing U.S.-China trade fight has also stoked demand worries, analysts say. 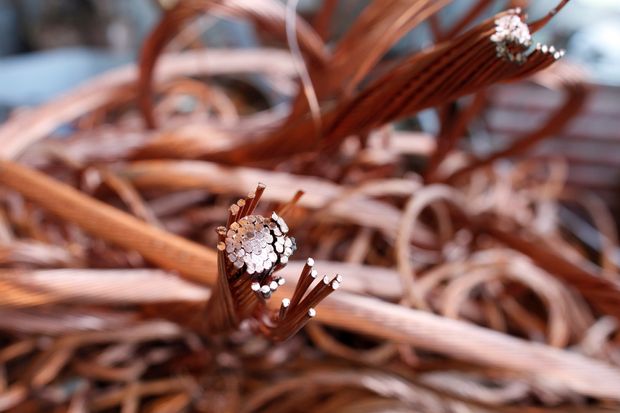 Copper prices, which are down about 18% from their June four-year highs, have been hurt by concerns about global growth. Photo: ruben sprich/Reuters

Stocks around the world and other commodities including oil have slid lately, a sign to some investors that concerns about the global economy are growing more pronounced late in the year.

Analysts were looking ahead to the Federal Reserve’s latest interest-rate decision, expected Wednesday afternoon following the central bank’s two-day meeting, for the next event that could impact sentiment about economic growth.

Write to Christopher Alessi at christopher.alessi@wsj.com and Amrith Ramkumar at amrith.ramkumar@wsj.com