The COMEX copper futures contract rolled from December to March futures as the final month of 2019 began this week. Copper’s nickname is Doctor because, at times, it diagnoses the health and wellbeing of the global economy. These days, copper is one of the primary commodities in the crosshairs of the trade war between the US and China. The dispute has weighed heavily on the Chinese economy. Since the most populous nation in the world is the most significant consumer of the red metal, economic growth in China is a primary driver of the price of copper.

Doctor Copper is now a barometer for the ups and downs of trade. The price dropped from around $3.30 per pound in June 2018 to below $2.50 and was trading at just under the $2.70 level on the now active month March COMEX futures contract on the final trading session in November.

Southern Copper Corporation (SCCO) shares move higher and lower with the price of the nonferrous metal that’s the leader of the other base metals that trade on the London Metals Exchange.

Copper is sitting closer to the recent high than the low

In early September, the price of the now active month March futures contract on COMEX probed below the $2.50 per pound level.

The daily chart of March futures shows that the price fell to a low at $2.4935 on September 3 and has been making higher lows and higher highs over the past three months. The most recent high was at $2.7385 in early November, and copper was trading around $2.6550 on the final trading day of November. Price momentum and relative strength indicators were slightly on either side of neutral readings as the price was closer to the recent high than the early October low.

The total number of open long and short positions on the COMEX copper futures contracts dropped from 260,040 on September 3 to 210,795 contracts late last week. Rising price and declining open interest is not typically a technical validation of a bullish trend in a futures market. At 15.18%, daily historical volatility was starting to move higher.

Trade is the most significant factor

Copper hit the lows on September 3 after falling steadily since mid-July when the price probed above the $2.80 level on the March contract. The price of copper had moved to the upside on the back of optimism that the US and China would agree on a deal for trade. However, an escalation of the trade war in early August weighed on the price of the nonferrous metal.

When President Trump slapped new tariffs on Chinese exports to the US on August 1 and China retaliated with protectionist measures, the price of copper declined. However, pessimism over the escalating trade war gave way to optimism as both sides signaled that a “phase one” deal on trade was on the horizon. The most recent bullish price pattern in the copper market reflects a return of optimism over trade. Meanwhile, as we enter the final month of 2019, the prospects for a deal by the end of this year seem to be dimming. US support for protesters in Hong Kong and China’s insistence that a deal includes a complete rollback of US tariffs are the current stumbling blocks on the road to any agreement. Copper is closer to the recent high than the early September low, but the price was sitting below the $2.70 per pound level at the end of November.

Inventories are not bearish

Stockpiles of copper on the two leading copper exchanges in the world have been moving in opposite directions since October. Copper inventories on the London Metals Exchange have been declining, but COMEX copper stocks have increased. The net of the two has been a decrease in global copper inventories. 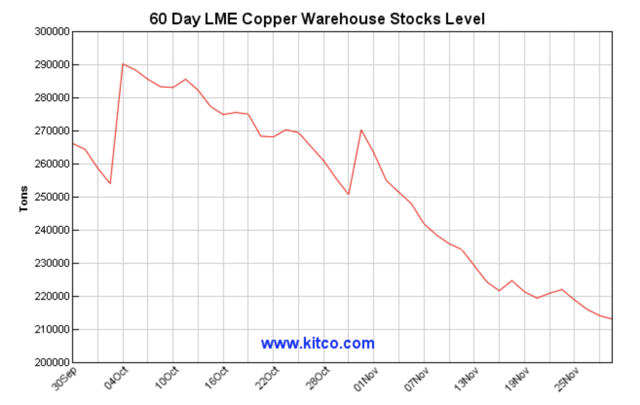 The chart of LME warehouse stocks since early October shows a decline from 290,000 to 210,200 metric tons of the red metal as of late last week. 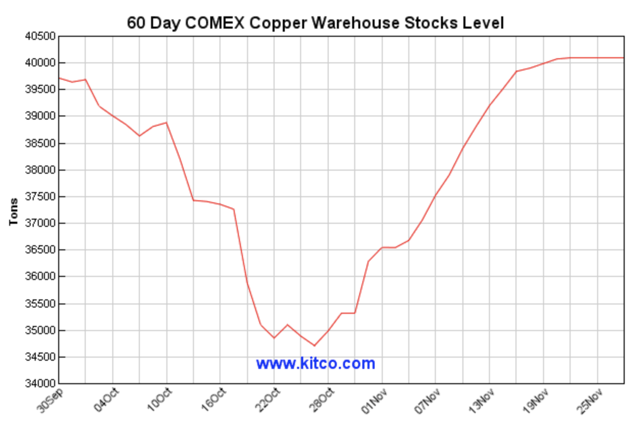 At the same time, COMEX inventories have increased from under 35,000 to over 40,000 metric tons since late October. The net decline of around 75,000 tons is a supportive factor for the price of the red metal.

Trade remains the most significant factor when it comes to the path of least resistance for the copper futures and forward markets. While the red metal is closer to the recent high than the lows, the technical position of the market from a longer-term perspective shows that copper remains in a bearish trading pattern.

The weekly chart illustrates that the price has been making lower lows since trading at over $3.30 per pound in June 2018. At that time, the threat of a strike at the world’s leading mine in Chile caused supply concerns. The labor action ended, and the trade war caused copper’s price to enter a bearish price trend that has been in place for the past year and a half. Meanwhile, political problems in Chile continue to provide some degree of support for the copper market. Chile is the world’s leading producer, but since China is the 800-pound gorilla when it comes to consumption, the ongoing trade war continues to trump any supply concerns from Chile.

I continue to believe that the US and China will eventually agree to compromise on trade. President Trump needs a victory on trade to fulfill his 2016 campaign promise, and President Xi needs a deal to bolster China’s economy. Given the decline in stocks and the prospects for a deal, I would view price weakness in the copper market as a buying opportunity.

Southern Copper Corporation (SCCO) engages in mining, exploration, smelting, and refining of copper and other minerals in Peru, Mexico, Argentina, Ecuador, and Chile. The shares do an excellent job tracking the price of the red metal. 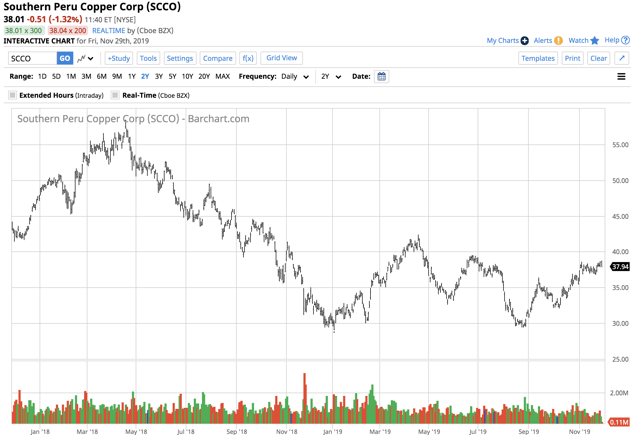 As the chart shows, when copper was on its way to the June 2018 high at over $3.30 per pound, SCCO shares moved to a peak of $58.09 in April 2018. Since then, like copper, the price of the shares has made lower highs and lower lows. The most recent bottom came in August 2019 after the escalation of the trade war, which sent the shares to a low at $29.39 per share. The recovery in the price of copper pushed the price of the shares to the $38.00 level as of the end of last week.

SCCO has a market cap of $29.38 billion at $38.01 per share. The stock trades at just over twenty times earnings, and over 700,000 shares change hand on an average trading session. SCCO pays shareholders a handsome 4.15% dividend.

The price of copper has been sleeping right under its most recent high. A trade deal between the US and China would likely light a bullish fuse under the red metal. SCCO shares should follow the price of copper over the coming weeks and months. The current level of the dividend makes the company a hold as it pays shareholders to wait for the price of copper to move to the upside.

Weakening Dollar Could Lift Commodities in 2020